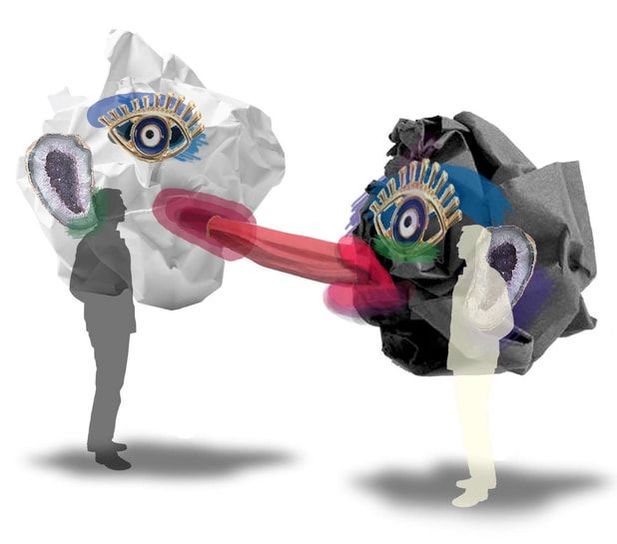 In a wonderland of “fake news” and misguided perceptions, the giant heads of two characters TWEETLE and TWIDDLE arrive to offer some semblance of harmony. Two seemingly oppositional trains of thought are put forward and onlookers will try to make sense of the subsequent conversation projected upon a tongue-tied stream. Participants are invited to go down the rabbit hole within these giant masks and offer their textual talking points to complete the closed-circuit dialogue. Through digitized poetry, typing machines, and projected imagery, a simulated text message conversation begins. But where do the algorithms behind a black mirror or of the human mind itself break down and provide more disconnection than real connection? When talking heads only talk, perhaps the conversation will always only represent two separate entities expressing themselves without response to the other. If we’re lucky, maybe between the lines, we’ll see how the two compliment each other’s absurdity.

The giant heads of two characters TWEETLE and TWIDDLE are suspended from the ceiling. They face each other with an open stare ready to engage in an open dialogue from opposing trains of thought. Between them are two digital typewriter docks / keyboards connected to an infinite scroll also suspended from the ceiling in a wave-like stream of consciousness tongue-tied in discourse. Participants are invited to enter the rabbit hole within these giant masks in order to complete the closed-circuit dialogue between these two characters.
Inside both masks, participants are confronted with imagery aligned with the subsequent identity of the character they choose portrayed by a display screen suspended at eye level in front of them, as well as lighting and the painted interior of the head they sit inside. Inside TWEETLE, the aesthetic is of the shadow-polarity with imagery of war, poverty, anger, and despair, while TWIDDLE propels the participant into a bright world of peace, community, love, and tranquility.
Through text prompts upon the display screen, participants are instructed to engage in a text conversation with the character across from them. TWEETLE is asked to answer ego-shattering questions and type an array of retorts that border on the insulting, while TWIDDLE is queried with an assortment of empowering messages that deepen their relationship with their peer and they are encouraged to respond with light-hearted compliments. To both participants the conversation appears like a text message chat, like what we’re used to on our cell phones, where they see what they type and receive a message from their peer after a few seconds delay.
By way of an algorithm, that both connects and distances this peer-to-peer network, what both participants receive is different from what their actual peer is sending them. Inside the head of TWEETLE, the participant will receive questions of banality like “What do you do?” and baits to their anger in the vain of Shakespearean cuts of wit (ie. “I bite my thumb at you, sir”). Inside the head of TWIDDLE, everything is “love and light” with a resounding chorus of poetry expressing unending compliments upon the participants innate beauty. The imagery and text on both sides of this simulated conversation is G-rated and doesn’t go too deep beneath the skin, so to be playful instead of too overly impactful to the participants’ experiences. Participants will engage in this dialogue for 3-5 minutes before a text prompt tells them the conversation has ended.
To spectators who surround this installation, they perceive the messages of the two participants as pop ups projected like thought bubbles upon the infinite scroll between them, with only the remarks that each participant types in real time. The “conversation” will look chaotic to any average onlooker, but with any luck there will be some semblance of narrative that forms about how two people are never quite having the same conversation, when a black-mirrored device sits between them, and even with the visceral experience of typing out our experience to another, we must step outside the mask of our own projections to truly have a dialogue with our peer.

EXAMPLES OF TEXT PROMPTS:
Some other examples of sources for Text Arrays: